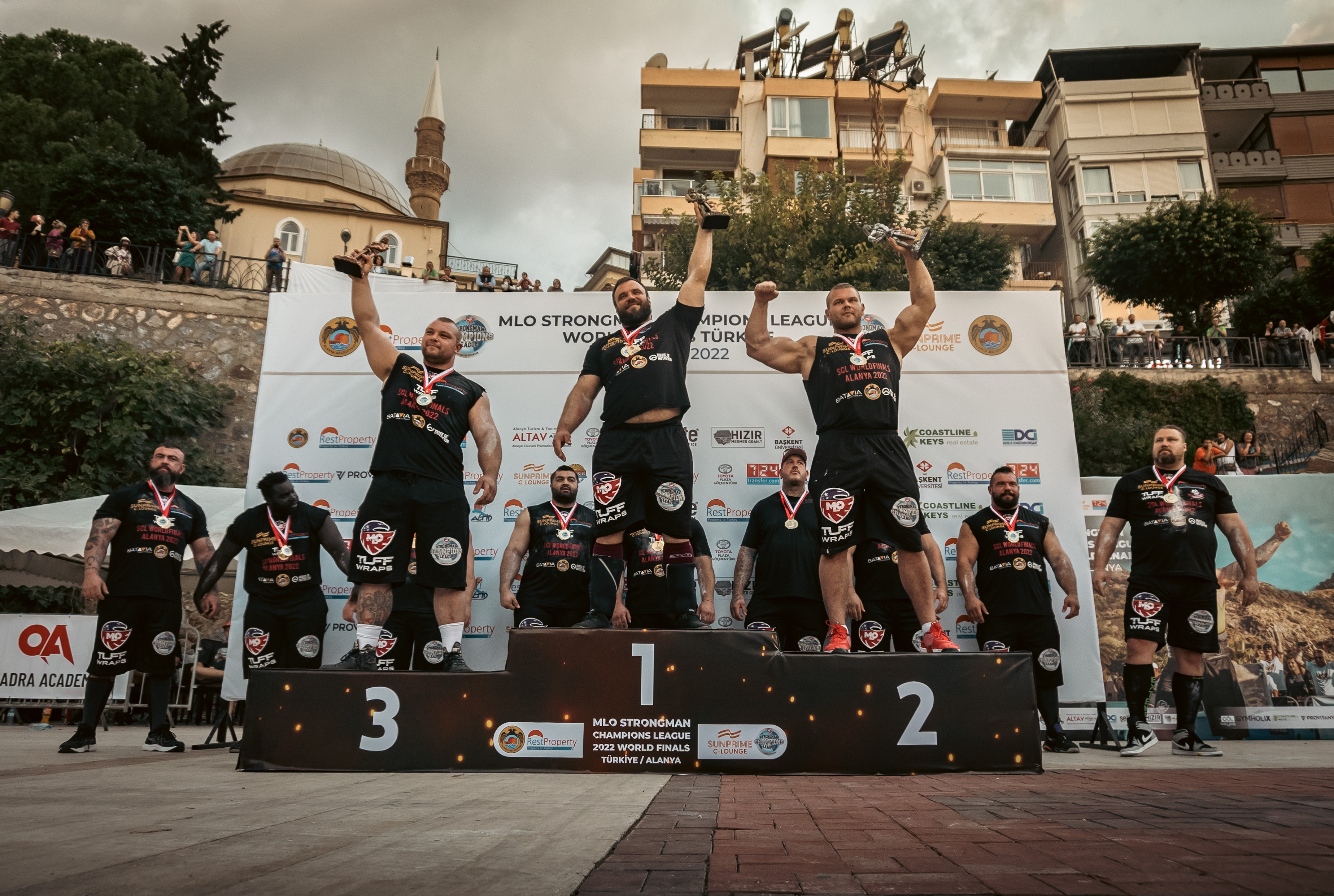 For the second time in three years, Aivars Smaukstelis from Latvia claimed the highest honour in MLO Strongman Champions League World Finals 2022. Displaying the hallmark traits of a true champion, Aivars remained meticulously organized, calm and clear-headed throughout the whole competition in Alanya, Turkey. He scored great results in almost every discipline in the finals, and his championship title was no surprise to anyone who witnessed this powerful athlete's strength and mental resilience to perform under such pressure.

As for the silver medal - it will decorate Ervin Toots' fastly expanding collection of strongman trophies after the Estonian giant also displayed fantastic consistency in his performance during MLO SCL World Finals 2022. Ervin excelled in several disciplines, most notably Conan's Wheel and Turkey Stones of Strength.

Kane Francis was unquestionably one of the greatest surprises in Alanya. He marched across the competition at full speed, saving his chances for the champion title until the end. A major mistake in the last discipline - Sandbag Loading Race, cost him the gold or silver medal, but nevertheless, his A-game in the tournament was more than outstanding. Words of praise deserved as well, Mika Torro, Roberto Rodriguez and Peter Juhasz, who came well-prepared and nailed high scores in a couple of the most difficult challenges.

The finals won't be finals without some battle wounds. Sebastian Kurek and Kelvin de Ruiter suffered injuries during two of the disciplines. Still, the pain was not enough to break these strongmen's spirit, and they both finished their series with admirable achievements. Trauma in the back also dampened Dainis Zageris' performance in MLO SCL World Finals 2022, and the former league champion couldn't reach the usual masterful levels of his strength, but even so, he managed to pull some tricks from his sleeve.

The two-day event in Alanya, Turkey, was marked by the impeccable organizational skill of the local hosts and SunPrime C-Lounge Hotel, where the strongman athletes fully recharged their batteries after the gruesome sports challenges they endured on the beach. Crowds accompanied and cheered every stage of the competition, and if there were a grand prize in the category of showman Evans Aryee from Belgium would have brought that one home.

As always, working with the Strongman Champions League and such a fantastic group of talented, fierce and passionate power athletes has been the highlight of our year, and we are looking forward to the next one!